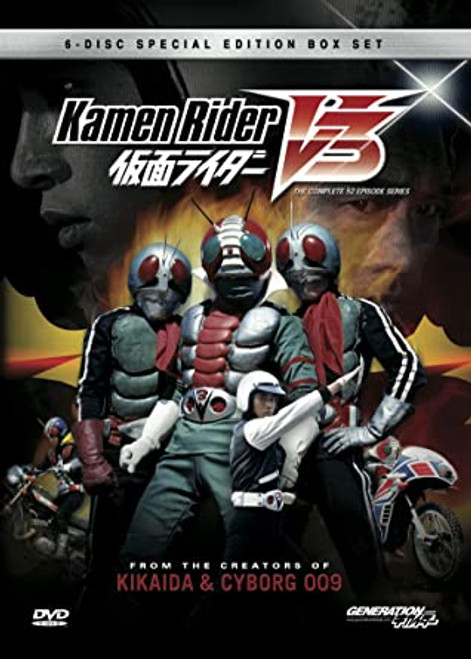 After witnessing the brutal murder of his family and mortally wounded at the hands of the demonic Destron organization, motocross phenom Kazami Shiro (Miyauchi Hiroshi) is reborn as a cyborg created by Kamen Riders One (Hongo Takeshi played by Fujioka Hiroshi) and Two (Ichimonji Hayato played by Sasaki Takeshi). Drawing power from his Henshin Belt, Shiro vows to avenge his family and annihilate Destron! Astride his superbike, the Hurricane, V3 charges into their army of mutants...

Exploding with breakneck action by the Ono Ken-Yukai, an exciting score from Kikuchi Shunsuke (DRAGONBALL Z), and the electrifying presence of action star Miyauchi Hiroshi, KAMEN RIDER V3 defined the superhero genre for a generation of Japanese television viewers in the 1970s. Fight on, Kamen Rider V3!

From JN Productions, Inc., producers of the "Kikaida" DVD.
This is the box set you've been waiting for!