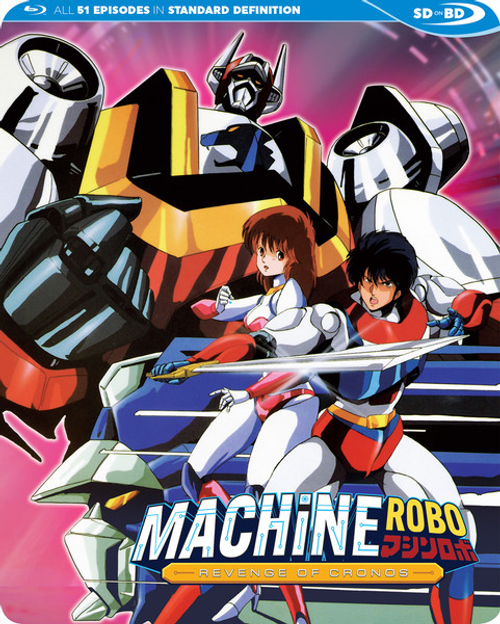 Machine Robo Revenge Of Cronos Blu-ray contains episodes 1-47 of the anime directed by Hiroshi Yoshida, as well as the 4 Leina OVA episodes, all in standard definition on a Blu-ray disc.

An evil organization, Gandora, plunders the peaceful robotic world of Cronos while searching for a mythical energy source, the Hyribead, which is said to grant eternal life. The young champion who challenges them is Rom Stol, heir to the Sky Space and Heart Fist martial art school founded by his murdered father. But just before he dies, Kirai Stol bestows upon his son the Wolf Sword, which Rom can use in time of need to transform into a more powerful form, Vikung-Fu. Now Rom is joined by his sister, Leina, and metamorphosing allies Drill and Jet, as they build a Machine Robo army to defend Cronos against Gandora’s horrific menagerie of cyborgs.

This complete collection includes all 47 episodes of the original Machine Robo series in standard definition, and the 4 Leina OVA episodes! In the original Japanese language with English subtitles.